As the 19th Century came to a close, professional baseball continued to evolve and grow into America's sport.  While the start of the 1890s had many of the traditional teams in a position of power in the National Association, by the close of the decade, there would be a seismic shift that appears may shake the game to its very core.  In between, there were several amazing moments, tremendous players and outstanding teams that gave fans a reason to come to the ballpark every day.

By the end of the 1880s, the Pittsburgh Alleghenys and Philadelphia Athletics had caught the Cincinnati Reds at the top of the National Association.  Pittsburgh passed the rival Reds in 1891 when they took the National Association pennant, and Philadelphia would follow with a pennant of their own in 1893, though it took a move to Louisville in order to accomplish the feat.  In between, the Reds found themselves atop the association again with their 12th pennant in 1892.  Following another Cincinnati pennant in 1894 and a second Pittsburgh victory in 1895, the trio of teams were joined at the top by the Boston Reds and and Cleveland Spiders.

The Boston and Cleveland clubs had been knocking on the door at the top at the National Association for quite some time, and in 1896, it finally opened.  The Boston Reds won their first pennant in 1896, and claimed two more in 1898 and 1900.  Meanwhile, the Cleveland Spiders, who had been nipping at the heels of the Cincinnati Reds for years as the Cleveland Blues, took the 1897 pennant and had strong showings in each of the next three seasons, but were unable to win a second title.  The late decade success of Boston and Cleveland gave each franchise a large boost to their overall value, and would help move the National Association into the 20th century with a massive change.

Following Boston's pennant in 1900, a group of young, ambitious owners approached the owners of the Boston Reds and seven other teams with an offer.  They wanted to purchase the franchises and start a new league to compete with the National Association.  Several of the offers were made to struggling teams in the association, and they, along with the owners of the Boston Reds, accepted.  An offer was made to the owner of the Cincinnati Reds franchise, but was declined, leading that group to found a new franchise in Philadelphia.  The owners of the Louisville Colonels had been hoping for an offer, and when none came, they announced the folding of their franchise.  Many of Louisville's top players were signed by Philadelphia.

With the eight clubs in hand, the group of owners announced that they would be leaving the National Association and forming the new American League, which would begin play in 1901.  Outraged at the betrayal, the remaining National Association franchises renamed their group the National League and announced an eight team schedule for the 1901 season.  The Chicago franchise even changed their club name to Orphans to show their disgust at the dissension.  The American League has already begun offering larger contracts to players from National League clubs to entice them to "jump leagues."  While it doesn't appear that any players have taken the offers yet, it seems to be only a matter of time until the prospect of playing for the Boston franchise in the American League lures a top player from a struggling National League franchise.

Below is a current list of the American and National League clubs.

Pitching once again took over the game in the 1890s.  At the start of the decade, there were only three pitchers that had surpassed the 300 win mark.  By the end of the 1900 season, 21 pitchers had reached that milestone, and five had won over 400 games.  At the top of the list was Cleveland's Jim Whitney, who retired after the 1899 season with an amazing 494 career victories.  From 1891 through the 1899 season, Whitney won 233 games and was one of the main reasons behind Cleveland's continued success throughout the decade.  Though he is now retired, Cleveland does still have the services of Toad Ramsey, who crossed the 400 win threshold during the 1900 season.  In the National League, Pittsburgh's Matt Kilroy has an excellent chance of becoming the first pitcher with 500 career victories, as he sits just 35 wins short of that mark now.  Considering Kilroy won 33 games in 1900, it may only take another year or two for him to reach 500 wins.

Along with the renewed emphasis on pitching came outstanding individual success as well.  Over the last decade, ten pitchers threw no hit games, with Charlie Geggus of the now defunct Louisville Colonels becoming the first pitcher to throw a "perfect game," which is a game where no opposing batters reach base by any means.  Following his historical performance in 1896, Geggus pitched through the 1899 season, and his decision to retire was cited as one of the driving factors behind the dissolving of the Louisville franchise.

Below is the current list of pitchers with over 300 career victories. 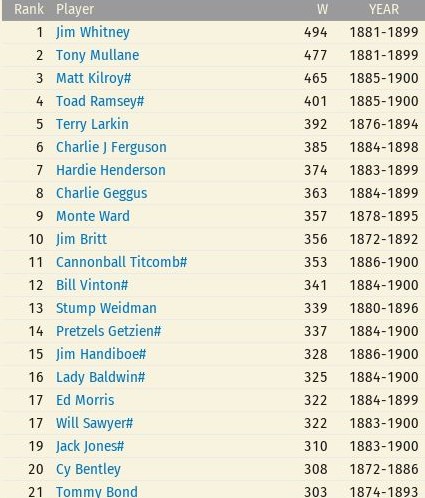 Due to the increased success from pitchers in the 1890s, hitters found themselves struggling at the plate more often than not.  Amazingly, Ross Barnes never surpassed the 3,000 hit barrier.  He retired following the 1891 season with 2,850 career hits, and that mark would stand for most of the decade.  Cincinnati's Fred Dunlap would pass Barnes in 1897, but has seen his playing time decrease incredibly since the momentous day.  At the start of the 1901 season, Dunlap is still a member of the Reds, but is unlikely to reach 3,000 hits as well.  The historic mark may finally be reached by a hitter like Denny Lyons, Billy Hamilton, Hugh Duffy or Ed Delahanty, but that remains to be seen.

Listed below are the career hit leaders. 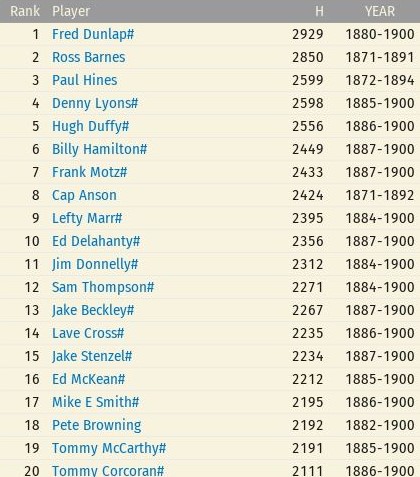 Posted by GreatSportsReplay at 1:31 PM