Baseball's second decade showed that the sport was going to be able to evolve and thrive.  New teams reached the top of the National Association, and additional rivalries were born as a result.  The pitching boom of the 1870s evolved into an offensive explosion in the middle of the decade, but there were still several pitchers that found success.  As the 1880s came to a close, it became more certain than ever that baseball had become part of the fabric of the United States, and would continue to be ingrained there for the foreseeable future.

The most dominant team of the first decade of baseball, the Cincinnati Reds, saw their success continue in the first half of the 1880s.  Cincinnati won their fourth consecutive National Association pennant in 1881, as well as others in 1883, 1886 and 1890.  The biggest stars in Cincinnati were batsmen Fred Dunlap, Dave Orr and George Hall, while pitcher Monte Ward was a consistent force against opposing batters.  He also proved to be a competent hitter as well, compiling over 800 hits during the decade as Cincinnati's starting left fielder.

New Teams Rise to the Top

Cincinnati's old rival, the New York Mutuals, weren't as fortunate as the Reds.  They found their run of success had come to an end, and they were soon looking up in the standings to the franchises from Cleveland, Philadelphia, Detroit, Brooklyn and Baltimore.  It was Cleveland that found the most success, as they took National Association pennants in 1882 and 1884, and were one of the more solid teams over the course of the 1880s.

Very little was expected of the Baltimore Orioles when they joined the National Association in 1882.  However, they surpassed all expectations by winning almost half of their games in the 1882 season, and their momentum continued until they captured the 1885 National Association pennant by a single game over the Cincinnati Reds and Brooklyn Grays.  Their rapid success showed that young franchises could succeed in professional baseball, and supporters of those teams turned out in droves to see if their team could be next Orioles.

From 1887 through the 1889 season, teams that had always seemed a step or two away from a pennant were able to finally reach the summit of the National Association.  The Brooklyn Grays, Pittsburgh Alleghenys and Philadelphia Athletics all won their first pennants, and while the decade ended with the Reds back in first place, the success of multiple teams throughout the 1880s showed that teams were starting to evolve and competition for the pennant would be even more fierce moving forward.

While offenses began to catch up to pitching in the 1880s, pitchers were still extremely valuable.  Any team that wanted to compete over the decade needed at least one, if not two, pitchers that they could rely on on a daily basis.  The Cincinnati Reds were fortunate enough to have two of the best pitchers in baseball on their team.  While Jim Britt's arm strength began to fade following the 1884 season, he still finished the decade atop the career wins leaderboard.  The Reds didn't miss a beat though, as youngster Monte Ward immediately stepped into the vacancy at the top of Cincinnati's rotation.  Ward finished the decade with 227 wins and became the third pitcher in baseball to surpass the 300 win mark.  Britt was the first, and Cy Bentley of the Detroit Wolverines was the second.  While Detroit was unable to reach the top of the National Association, Bentley rose in prominence, and ensured that Wolverines fans had a reason to come to the ballpark.


Below is the Top 20 Leaderboard of winningest pitchers in the National Association. 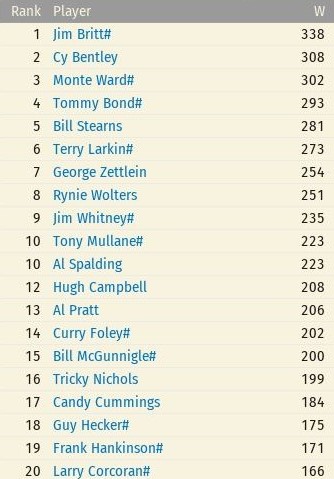 As expected, Ross Barnes continued his run of dominance at the plate.  By the end of the 1890 season, Barnes was far and away the hits leader of the National Association.  His 2,712 hits were 600 more than that of his teammate, Cap Anson.  Following the 1883 season, baseball experienced an offensive boom, as the quality of hitters began to catch up to the quality of pitchers.  By the end of the decade, four batters had passed the 2,000 hit mark, and it seemed almost a certainty that Barnes would become the first player in professional baseball to reach the 3,000 hit mark.  The only question remaining was who would be the next player to join him.


Below is the Top 20 Leaderboard of hit leaders in the National Association. 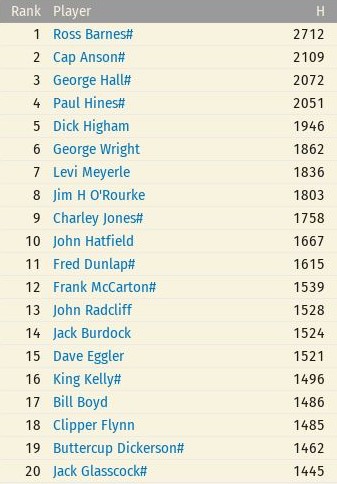 Posted by GreatSportsReplay at 12:57 PM