The best way to describe the state of professional baseball in it's first decade could best be described as fluid.  Teams were founded, folded and moved, all seemingly at a moment's notice.  As players began to find their footing with pitching and defense, offensive numbers began to slow, and by the end of the decade, pitchers were the stars of almost every franchise.  Here's a look back at the teams and leaders of baseball's first decade.


A Rivalry Shapes the Game

The first two years of the fledgling National Association were dominated by a single franchise.  The Rockford Forest Citys took the initial pennant by a game and a half, and, following a move to Baltimore in 1872, the Canaries, as they were now called, won 42 games and their second pennant in a row over the New York Mutuals.  The Mutuals would have their revenge, as they would finish atop the standings in 1873 and 1874, while the Canaries struggled on the field, and their attendance struggled as well.  A new owner moved the Canaries to New Haven in 1875, and while the Elm Citys would finish as the top team that season, their trip to Connecticut would be a short one.

Another change in ownership would come after 1875, and the new group took the Elm Citys and moved the club to Cincinnati.  A new name soon followed, and the Cincinnati Reds were born prior to the 1876 season.  The Reds continued their decade of success, winning three of the next four pennants, with the New York Mutuals interrupting their reign by finishing in first place in 1876.  With the 1880 season about to begin, the rivalry between the Reds and Mutuals is clearly the biggest in baseball, with matches between the two drawing tremendous crowds.  There have even been instances of fist fights in the stands between opposing teams of supporters.  Whether this rivalry continues to consume baseball for the next ten years remains to be seen, but the impact that the two powerhouses have had on the game can not be understated.

In the first decade of baseball, pitchers were more valuable than gold, and the teams that had the best pitchers almost always found themselves competing for the National Association title.  The Cincinnati Reds were fortunate enough to have two of the best arms in baseball in Jim Britt and George Zettlein.  By the end of the 1879 season, the two Red aces were the top two pitchers in career wins.  The New York Mutuals had no shortage of success on the mound, either.  They were fortunate enough to have discovered Bill Stearns prior to their initial season, and the youngster finished the decade with 206 wins and was the unquestioned face of the Mutuals franchise.

Below is the Top 20 Leaderboard of winningest pitchers in the National Association. 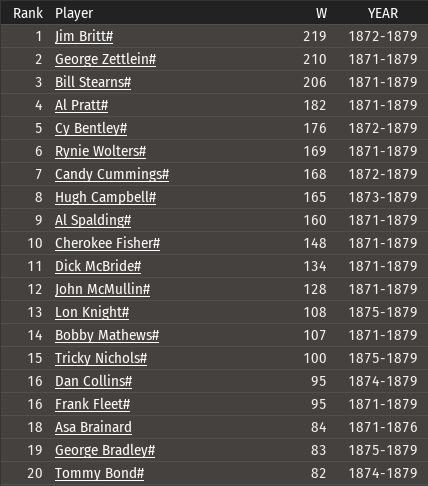 As pitching dominated and shaped the decade of baseball, offense and skills at the plate were desired, but not as easy to come by.  Even if a team was able to succeed at the plate, without good pitching and defense, the bats would be wasted.  For the majority of the decade, Levi Meyerle from Philadelphia was the career leader in hits, but his time at the top was limited.  Ross Barnes of the Cleveland Blues eventually caught and passed Meyerle, and while there is little distance between the two batsmen now, it appears that Barnes is going to be able to increase his lead as Cleveland clearly has the edge on Philadelphia in overall talent.

Below is the Top 20 Leaderboard of hit leaders in the National Association. 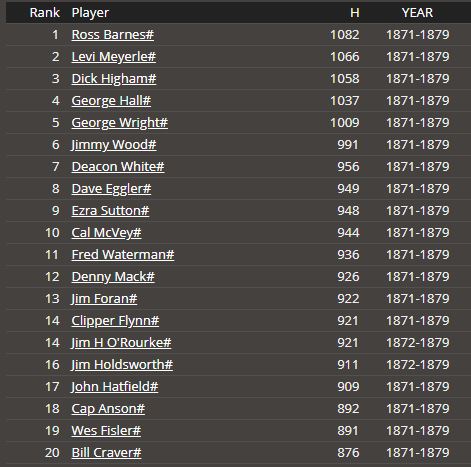 Posted by GreatSportsReplay at 6:09 PM