Spring has arrived, and with it comes the start of a new season of baseball.  Following the end of the 1901 season, relationships between the American League and National League appear to have thawed, and there have been preliminary talks of a championship series between the winners of each league.  While those talks are ongoing, let's review the major happenings of the off season, and see which teams have been favored to finish atop of their leagues in 1902.


Only One Player Jumps to American League

With the relationship between the American and National Leagues improving, it appeared that club owners from the Junior Circuit were less willing to try and pry players away from the National League.  In fact, only a single player was enticed to jump to the American League.  Ed Abbaticchio, formerly of the Chicago Orphans, switched leagues when he signed with the Detroit Tigers.  Abbaticchio has been named the starting second baseman for Detroit, which is an improvement over his backup role with Chicago and is an obvious reason for his jumping. 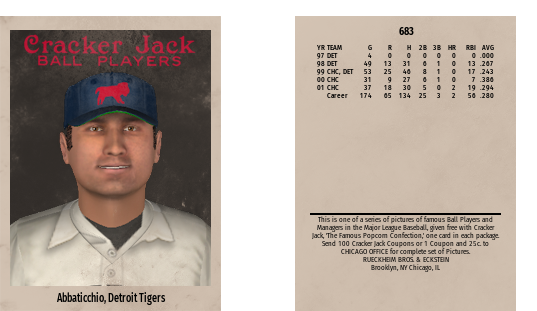 The Milwaukee Brewers did not have successful season in 1901.  The team finished last in the American League, and ranked last in attendance.  With future prospects in Milwaukee looking bleak, the owners of the Brewers found a new city for their team and moved the club to St. Louis.

The newly named St. Louis Browns will be competing with the National League's St. Louis Cardinals for fans and players. However, the opening of talks between the leagues appears to be limiting poaching attempts by either club.  Whether or not the Browns are able to find success in St. Louis remains to be seen, but they certainly can't do much worse than they did in Milwaukee. 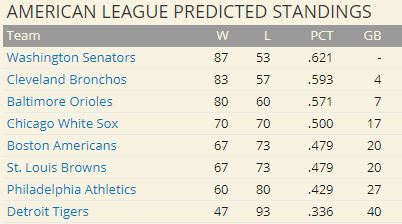 Experts are predicting a three team race for the American League pennant this coming season.  The defending champion Cleveland Bronchos are included in that group of three, as are the Baltimore Orioles and the Washington Senators.  The inclusion of the Senators is a puzzling one, as the team won just 61 games last season and did little to improve the team during the off season.

The Philadelphia Athletics decline to the bottom of the American League appears to have almost been completed, as they are seen to be one of the worst teams in the AL in 1902.  They have also jettisoned many of the higher paid players, including Cy Young, who was traded to the Boston Americans in December.  Despite the addition of Young, the experts are not to keen on Boston this season, as a fifth place finish is expected. 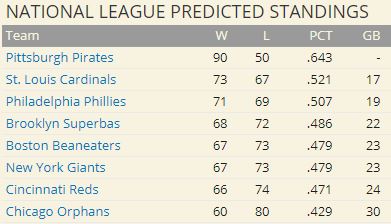 The expected race in the National League appears to be less than exciting.  Baseball writers see the Pittsburgh Pirates as being the best team in the league by far.  The defending champion Cincinnati Reds appear to have very little chance to retain their title, as they have been predicted to finish near the bottom of the National League.

Outside of the Pirates, the writers are predicting quite a bottleneck of teams competing for second place.  Almost every team in the league, save for possibly Chicago, is seen as having a puncher's chance at the second place position.  You don't have to look far to see that these predictions may not be an exact science, however.  Just last season, the Pirates were again seen as being the team to beat in the National League, only to have the Reds shock them at the end of the season.  Whether or not the Reds, or any other NL team can do the same this year remains to be seen, but we will all find out together as the season plays out.
Posted by GreatSportsReplay at 3:36 PM