A new year is about to begin for baseball, and while no team packed up and moved over the winter, there was no shortage of stories during the offseason.  The biggest news concerns the involvement of the National League in the World Series and whether or not there will even be a series this year.  On top of that, the country's finest writers have compiled their predictions for the pennant races this year.  If there is a championship this season, which two teams do reporters believe will square off?  You can find out below.

National League Threatens to Pull Out of World Series
Following the humiliating defeat of the Pittsburgh Pirates at the hands of the Chicago White Sox last season, National League team owners held a meeting to discuss the involvement of their clubs in a World Series in 1904.  While some clubs appear willing to participate in a second World Series this year, the majority of owners do not appear interested in "humoring" the American League again.  The prevailing thought is that the owners do not want to see their teams be defeated in a similar fashion to the Pirates last year.
American League teams are said to be quite angry at the NL decision, and did consider a second round of player raids this offseason in retaliation.  However, cooler heads prevailed, and no club took place in any talent raids.  American League owners have begun making overtures to the NL owners, and a meeting is likely to take place during the regular season.  Whether or not a World Series is played this year remains to be seen, but if there is none, expect an agreement to be put in place starting in 1905.
Several Individual Milestones Within Reach
As we approach the start of the season, there are a handful of elite players approaching individual milestones in their careers.  Frank Motz has suffered as a relative unknown outside of St. Louis Browns fans, but he has put together an outstanding career.  After leading the American League in batting the past three seasons, Motz finds himself just 17 hits away from 3,000 for his career.  On top of that, Motz is also just five stolen bases away from 800 steals.  At just 34 years old, there is a very good chance that Motz will finish his career as baseball's all time hit leader, as he is just 49 hits behind Hugh Duffy for that mark.  While Duffy is still active as well, he is 37 years old and will be retiring sooner, rather than later.  The Browns haven't had much to celebrate in their brief history, but Frank Motz is certainly worth a celebration.
In addition to watching Motz's chase to 3,000 hits, there are two pitchers who are closing in on 400 wins for their careers.  Cincinnati's Bill Vinton finds himself 11 wins shy of his 400th victory, and Bill Handiboe of the Boston Americans comes into the season with 385 career victories.  Both pitchers have a relatively good chance to surpass 400 wins this year, and fans in both Cincinnati and Boston are excited to see the moments happen for two of the better pitchers in baseball history.
American League Predictions 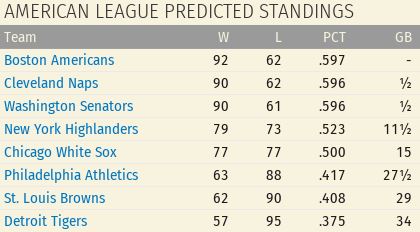 Following the surprising rise of the Chicago White Sox last season, baseball writers from around the country believe the defending champions will fall back to earth in 1904.  The expected race to the top of the American League pennant is seen as a three team sprint between Boston, Cleveland and Washington and the writers see Boston as the best team of the three.
The Americans are seen as having a solid balance of offense and pitching, with Harry Davis leading the way at the plate and Amos Rusie setting the tone on the mound.  Cleveland has the fiery John McGraw as the pace setter on offense with Doc White and Jack Chesbro as their pitching leaders.  Meanwhile, the Senators may have the best offense in the American League.  Hugh Duffy, Nap Lajoie and Jesse Burkett form a heart of the lineup that any team would like to have.
You should not forget about the defending champions, however.  They won the World Series in dramatic fashion, and are bringing back many of the same players that won the championship in 1903.  If the White Sox can put the pieces together again this year, they could easily find themselves atop the American League for a second year in a row.
National League Predictions 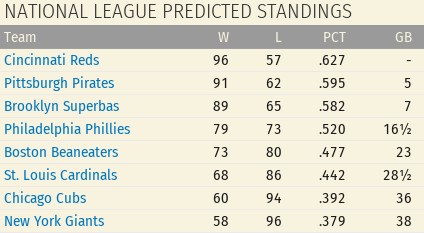 In the National League, writers are predicting a changing of the guard.  While they still see the Pittsburgh Pirates as one of the best teams in baseball, the notion at the moment is that the Cincinnati Reds are the team to beat for the NL pennant in 1904.
The strength of the Reds is clearly their pitching staff.  The young Chief Bender is expected to have an outstanding season, as are Ginger Clark and the veteran Bill Vinton.  Cincinnati's offense is less stellar than their pitching staff, but baseball writers believe that the pitching of the Reds will be enough to carry them to the pennant.  In Pittsburgh, the Pirates are still recovering from the World Series, but they have brought back a large amount of the players from the NL champions from last season.  Ed McFarland and Bill Byers have stepped into the lead roles on offense, while the ageless Matt Kilroy returns for yet another season as the face of the Pirates.  Until Kilroy steps away from the game, the Pirates will likely always be competitive.
The Brooklyn Superbas had a surprising season in 1903, and writers are expecting them to be even better in 1904.  Addie Joss and Wiley Piatt already formed a solid pitching core for Brooklyn, and the Superbas discovered and added another arm this winter in the form of Orval Overall.  The 23 year old is expected to step right into the rotation and make a tremendous impact for Brooklyn.  The Superbas are also expecting another solid season from Sam Crawford at the plate, and at just 23 years of age, Crawford's best years are still in front of him.
There was some news made by the Boston Beaneaters this offseason as well, as they have signed a 17 year old player from Georgia.  Ty Cobb was discovered by Boston following a series of articles written by Grantland Rice regarding his skills in the field, and while he is still very much a work in progress, Boston fans are already getting their hopes up regarding this youngster and the potential that he has.  Not much is expected of the Beaneaters this season, but as Cobb develops, that could change very quickly.
Posted by GreatSportsReplay at 6:52 PM