It is the dawn of a new era of baseball as the 1903 season begins.  It appears as if any animosity between the American and National Leagues has been resolved.  There now appears to be a working relationship and a hopeful lasting peace between the two leagues.  The end result of this peace is an American League team moving to New York City, as well as the start of a championship series between the two pennant winners at the end of the season.  Which teams are seen as the favorites to reach that series?  The experts have been polled, and the results, as well as other news of the offseason, are below.

The announced move of the Orioles to New York City was expected following the 1902 season, and it came to pass shortly after it's conclusion.  With crowds in Baltimore faltering, the club owners were looking for a fresh start, and the American League was hoping to get a franchise in New York as well.  Both goals were able to be met, and the New York Highlanders were born.  With a new name, new uniforms and a new stadium, expectations are high in the Big Apple, while jilted fans in Baltimore seem to have taken to either cheering for Washington or Philadelphia to fill the void in their hearts. 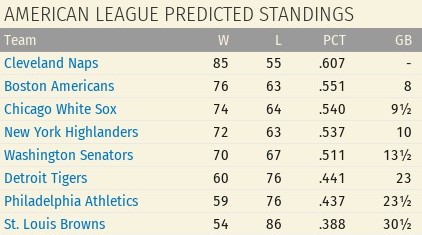 In the American League, hopes are high in Cleveland, as the newly named Naps are considered the favorite to win the pennant this season.  After finishing just a game short in 1902, the Naps appear to have a renewed focus coming into this season, and they know that they want to be seen as not just one of the best teams in the American League, but in all of baseball.  Coming in behind Cleveland are a group of three clubs which include last year's pennant winners, the Boston Americans, the Chicago White Sox and the New York Highlanders.

The Naps are paced by an excellent group of pitchers.  Leading the effort is 24 year old Doc White, who won 23 games in 1902.  White appears to be one of the best young pitchers in all of baseball, and he has committed to taking the necessary steps to get Cleveland to the championship series this season.  Supporting White on the mound will be Doc McJames, Jack Chesbro and newcomer Fred Burchell, who spent the prior two seasons on Cleveland's reserve roster and has been promoted to the club this season.  At the plate, Cleveland has a strong presence in John McGraw, who has led the American League in walks and stolen bases each of the past two seasons.  The 30 year old second baseman is the unquestioned leader of the Naps, and when he talks, his teammates seem to be drawn to him.

The greatest threat to the Naps would appear to be the Boston Americans.  The Americans have a trio of experienced arms in Jim Handiboe, Amos Rusie and Cy Young, and they added a fourth strong pitcher in Vic Willis.  Willis was actually a trailblazer, as he was involved in the first cross league trade.  The Cincinnati Reds sent Willis to Boston in the move, and he is being looked at to give the Americans pitching staff a bit of a youthful injection.  Their offense still leaves something to be desired, but it will be intriguing to see if the veteran pitching staff can push the Americans to the pennant. 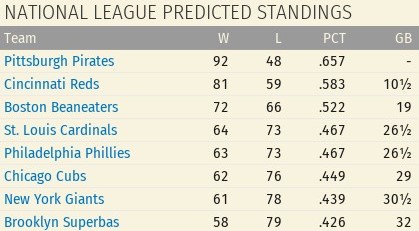 The race for the pennant in the National League appears to be a two team race, and one of those teams seems to be starting with an impressive lead.  The Pittsburgh Pirates are the easy favorites to claim their second straight National League pennant, and with the team that they have assembled, it's easy to see why baseball experts believe that they can.

The Pittsburgh pitching staff are the same as last year, with all time wins leader Matt Kilroy anchoring a group that includes last season's win leader Bobby Wallace and Buttons Briggs, who is being looked at as the next great Pittsburgh pitcher.  At the plate, Bobby McFarland and catcher Bill Byers are the offensive leaders of the team.  Neither McFarland nor Byers has even reached 30 years of age, meaning that the Pirates appear to be a team that is not only built to succeed right now, but also in the future as well.

The primary competition for the Pirates seems to be in the form of the Cincinnati Reds.  The Reds are coming off of a disappointing 1902 campaign, but appear to be ready to strike back at the Pittsburgh empire.  Cincinnati's newest weapon is youngster Charles "Chief" Bender, an 18 year old pitcher who was signed in the offseason.  With Bender now leading the pitchers and centerfielder Sammy Strang pacing the offense, the Reds want to climb the mountain and win a second pennant in three years.  Will they be able to, or will they again fall at the feet of the Pirates?  We will all know once the season concludes.
Posted by GreatSportsReplay at 6:44 PM