Winter has passed, and baseball's 1902 season is just days away from beginning.  Fans throughout the United States are ready to see their team compete for a pennant, and on top of that, they are ready to see the American League and National League compete for the first time.  While no agreement has been reached for a championship series yet, talks are still ongoing, and supporters are hopeful that a championship will be put in place for the 1903 season.  With that in mind, here are the season predictions, as well as the top players to watch, for the 1902 season.

With a new crop of players joining major league clubs this winter, now is the time to look at where some of the top prospects in baseball signed, and the potential impact that they will have on their new teams.

The biggest advantage that the Pirates had over the rest of the National League last season was their pitching.  This offseason, they improved their pitching staff even more, adding 22 year old Addie Joss to their club.  Joss, who is ranked as the top pitching prospect in all of baseball, will give Pittsburgh's coaches another weapon to use on the mound this season.  He is currently slotted as the third starter on the team, and adding him to a rotation that already featured Rube Waddell and Deacon Phillippe makes Pittsburgh even more likely to repeat as National League champions in 1902.

Not to be outdone by their cross-state rivals, the Philadelphia Phillies went out and found a fine young pitching prospect of their own.  They did not have to look far, as their scouts located and signed Ed Walsh, a 20 year old pitcher from northern Pennsylvania.  While Walsh doesn't appear to be an impact player this season, and will in fact start the year on the reserve roster, his future as a leader in the Philadelphia rotation can not be understated.  The Phillies have high hopes for this young man.

The new ownership of the Browns knew that if they wanted to attract fans of the Cardinals to their team, they would have to add some good young players to their roster.  They did just that with the signing of outfielder Patsy Dougherty.  The 25 year old, who is ranked as one of the best positional prospects in baseball, brings a great swing to the middle of the St. Louis lineup.  He is penciled in as the number three hitter for the Browns, and supporters of the team already believe him to be the best player on the roster.  Whether he can live up to those lofty expectations remains to be seen, but his arrival has people talking. 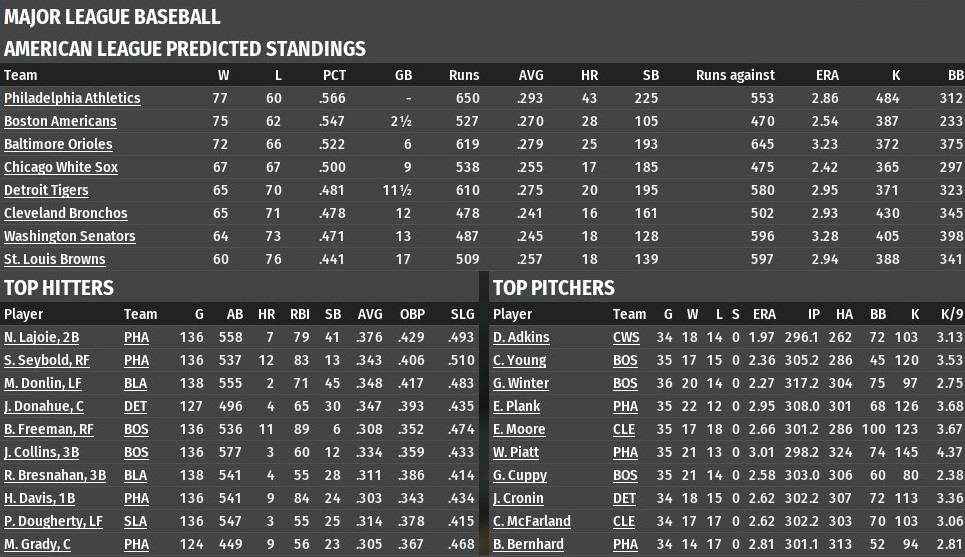 Our writers are predicting a very close race in the American League, but in the end, they are expecting the Philadelphia Athletics to finish on top.  The Athletics have Nap Lajoie and pitcher Eddie Plank returning from a team that finished second in the American League last season, and they are also expecting an excellent season from outfielder Socks Seybold.  The 31 year old, who finished with a .320 batting average and eight home runs last season, has a powerful swing, and is seen as much more of a long ball threat than teammates Lajoie and Lave Cross.  If Seybold's swing can provide the power that the Athletics are looking for, they may very well find themselves at the top of the American League for the first time.

The predictions have several teams nipping at Philadelphia's heels in the American League, starting with the defending champion Boston Americans.  The Americans return roughly the same team from last year, and while their pitching staff is beginning to get a touch older, Cy Young is a man that no sane person can count out.  The polling saw the Baltimore Orioles predicted to finish third, just a few games behind Boston, and the Chicago White Sox are expected to place fourth, behind the strength of newcomer Doc Adkins.  While Adkins is a rookie, his advanced age (29 at the time of this writing) makes him ineligible for consideration on top prospect lists.  With that being said, he's already seen as one of the best pitchers in the American League, and for the White Sox to succeed this year, they will need Doc to have an outstanding campaign. 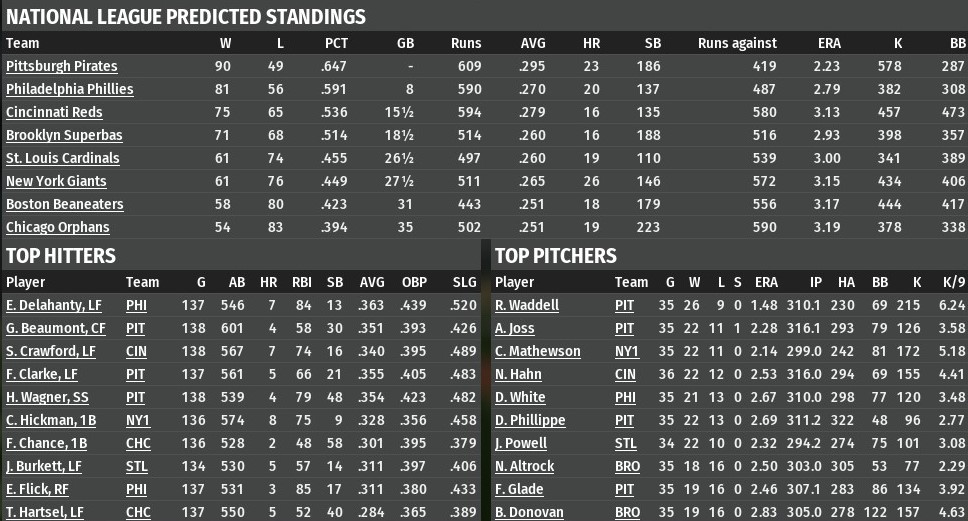 In the National League, our writers believe that the Pittsburgh Pirates  are going to continue their success from last year and repeat as National League champions.  The Pittsburgh pitching staff is head and shoulders above the rest of the National League.  It boasts the aforementioned Rube Waddell, Addie Joss and Deacon Phillippe, but the Pirates also added Fred Glade, an older newcomer to the major leagues.  With the improvements to their pitching staff alone, the Pirates would be a considerable force in the National League, but their offense is also one of the best in baseball.  The Pirates return almost their entire lineup from last year, and more contributions are being expected from Ginger Beaumont this year.  The young outfielder is being looked upon to set the table at the top of the Pittsburgh lineup and provide run scoring opportunities for Fred Clarke and Honus Wagner.

The chances of another National League team to take the pennant seem low, but the Philadelphia Phillies appear to have the best opportunity.  The Phillies return pitcher Doc White to the top of their rotation, and if new signing Ed Walsh can develop, Philadelphia will have a potent top of the rotation for years to come.  The Cincinnati Reds boast Sam Crawford at the plate and Noodles Hahn on the mound, but little else, but many eyes in the National League are focused on New York and the Giants.  The reason for the attention for a seemingly mediocre team is pitcher Christy Mathewson.  At just 21 years old, Mathewson may already be the best pitcher in the National League that isn't named Rube Waddell.  He led the NL in innings pitched and was second in strikeouts to Waddell last season, and even more is being expected from him this year.  If the Giants could put other talented players around Mathewson, the sky could be the limit for this team.  With the American League possibly looking into moving a club into the New York market, the Giants would be smart to act sooner, rather than later.

Posted by TheMightyHurka at 1:55 PM