With the start of the 1901 baseball season just days away, a new era of professional sports has dawned.  There is a saying that competition brings out the best in everyone, and with the American League declaring themselves at the same level as the older National League, it appears that baseball now has a simmering feud on it's hands.

The American League franchises have taken their newfound status as major league clubs to heart, and spent a large part of this offseason poaching some of the best talent from their National League counterparts.  Baseball pundits believe that while the National League will eventually put a stop to this practice, the mere fact that they must acknowledge the poaching gives credence to the idea of the American League being on their level.  In fact, owners from some American League franchises have already begun making noise about a potential championship series between their league champion, and the pennant winner from the National League.  No headway has been made in that regard yet, though it will be interesting to see when, and if, a series such as that will occur.

Writers from all 16 teams were polled, and they have put together their predictions for this year's season.  Their predictions, as well as some potential stand out players, are below. 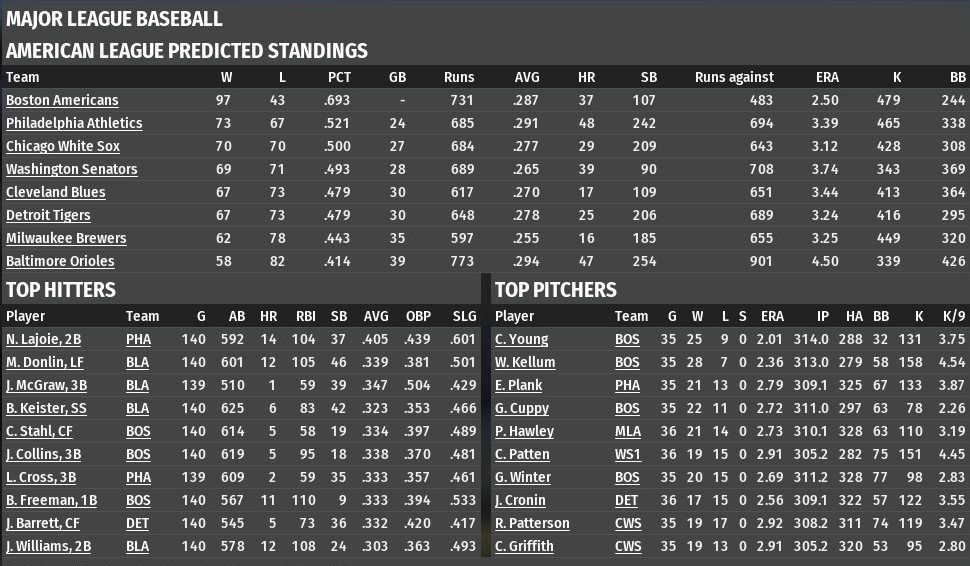 Coming into the season, the Boston Americans are seen as easily the top team in the American League.  Boston is bolstered by an outstanding pitching staff, and very few in the game's history have the credentials of new addition Cy Young.  Young, who was signed away from the St. Louis Cardinals of the National League this winter, leads a very talented Boston rotation into the regular season.  Assisting Young with the pitching duties are Canadian youngster Win Kellum and George Cuppy, who was signed away from the National League's Boston Beaneaters.

The only potential competition for the Americans this season appears to be from the Philadelphia Athletics.  New manager Connie Mack has brought a fresh outlook to the club, and with Nap Lajoie jumping to the Athletics from the cross-town Phillies, spirits are high among the players and fans entering brand new Columbia Park this season.

The National League teams may have had some of their best players jump to the American League, but fans of the Senior Circuit have a much more interesting pennant race to look forward to, at least according to the polled writers.  The National League predictions are as follows. 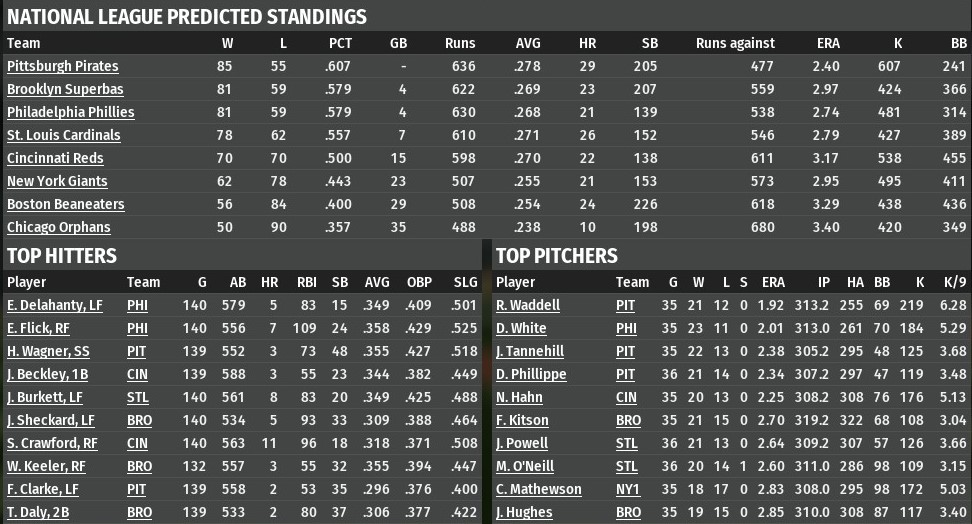 Much like the Boston Americans, the Pittsburgh Pirates are projected to win the 1901 National League pennant on the strength of their pitching staff.  Rube Waddell, Jesse Tannehill and Deacon Phillippe represent three of the top arms in the National League, and all three have been projected to have outstanding campaigns in 1901.  Waddell is seen as being the best of the trio, and at only 24 years of age, the future is very bright for the young man from Bradford, PA.

Unlike the American League, however, there is a projected pennant race in the National League.  The Brooklyn Superbas, Philadelphia Phillies and St. Louis Cardinals are all seen as having a puncher's chance to take the pennant, and considering the Phillies and Cardinals each lost some of their best players to American League poachers, the fans of both clubs should be optimistic.  It appears as if the Phillies have just a little more to look forward too, however.  The Phils were able to hold on to slugger Ed Delahanty, and it is believed that he will have yet another outstanding season in 1901.  On top of that, youngster Doc White was named as the top prospect in all of baseball, and is seen as being the best pitcher outside of Pittsburgh this season.

While it remains to be seen how the season will unfold, one thing is certain: a new era of baseball has begun.

Posted by TheMightyHurka at 2:13 PM